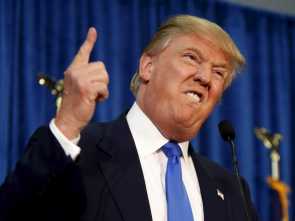 Election 2016 has taken a turn into territory unfamiliar and perhaps mildly terrifying to many Americans, potentially heading down a road characterized by political violence and what social scientists call “authoritarian aggression,” defined by retired psychology professor Robert Altemeyer as “a general aggressiveness directed against deviants, outgroups, and other people that are perceived to be targets according to established authorities.”

The divisive rhetoric of Republican frontrunner Donald Trump, who has called for a complete ban on Muslims entering the United States – not to mention his penchant for calling Mexican immigrants “rapists” and “criminals” and referring to African Americans as “the blacks” – is having predictable effects, with protesters growing increasingly vocal in countering this bigotry, culminating last week in the cancellation of a planned rally in Chicago.

Hundreds of anti-Trump protesters gained access to an event scheduled for Friday night at the University of Illinois at Chicago (UIC) and rather than face this hostile crowd, Trump decided to “postpone” the event.

“Mr. Trump just arrived in Chicago, and after meeting with law enforcement, has determined that for the safety of all of the tens of thousands of people that have gathered in and around the arena, tonight’s rally will be postponed to another date,” a campaign spokesperson announced half an hour after the rally was slated to begin.

Following this announcement, chaos ensued in the arena, with protesters breaking into cheers and chanting slogans such as “we stopped Trump.” A number of fist fights between protesters and Trump supporters also reportedly broke out.

The protest had been announced in advance on a Facebook page called “Stop Trump – Chicago,” listing several reasons for organizing against the billionaire’s presence at UIC.

“Trump has called for the complete and total shutdown of all Muslims entering the United States,” the organizers pointed out. Further, he has “generalized the entire Mexican immigrant community as criminals and rapists,” and “calls for the mass deportation of 11 million adults and children alike regardless of how long they have lived in the United States.”

The organizers also noted Trump’s public advocacy of war crimes including torture, murdering the families of suspected terrorists, and indiscriminate bombing of countries in the Middle East. Also, according to organizers, Trump’s “nativist, nationalist, and fascist stances parallel the most evil leaders this world has seen such as Adolf Hitler and Benito Mussolini.”

With these grievances in mind, the protesters wanted “to show Donald Trump that his bigotry and racism is not welcome here,” a message that seemed to be conveyed. Considering the protest’s success in disrupting the event, the tactic was certainly effective in this regard, but the effect that the protest had in allegedly curtailing freedom of speech and assembly is seemingly weighing heavily on some people’s minds.

Following the cancellation of the Chicago event, commentators have claimed that the protesters violated the First Amendment rights of Trump and his supporters.

“Even the most ardent anti-Trump among us should lament that a political speech was canceled due to fears of violence,” bemoaned First Amendment attorney Marc Randazza. “Standing up for the rights of those who would not do it for us is perhaps the noblest expression of a commitment to liberty.”

Similarly, Megyn Kelly – who has publicly sparred with Trump over misogynist comments he has made – regretted that “His First Amendment free speech rights have been shut down.”

Trump also weighed in, of course, claiming that “Our First Amendment rights have been violated.”

But the irony of Trump and his sympathizers complaining about First Amendment violations should not be lost on anyone. Trump himself has trampled First Amendment principles, including those protecting freedom of religion and the press, and should hardly be considered a victim here.

Among the real estate mogul’s more controversial comments was one that he made in September which seemed to indicate that he would be open to looking at ways to get rid of all the 3.3 million Muslims currently living in the United States.

At a town hall event in New Hampshire, a Trump supporter asked the candidate a meandering question about “a problem in this country … called Muslims.” After mentioning something about terrorist training camps that Muslims are allegedly operating in the United States, the man asked, “When can we get rid of them?”

When later asked to explain these remarks, Trump failed to retract them or even to clarify them in any meaningful way, issuing a statement that implied that the real issue is not discrimination against Muslims but an alleged war that is being waged against Christianity.

So, after just insinuating that he would be looking at ways to purge the United States of millions of practicing Muslims, Trump then flipped the issue on its head and claimed that it is somehow the Christians who are under threat and “need support.”

Of course, the very notion that there are “a lot of different things” that should be “looked at” to “get rid of” Muslims in the U.S. flies in the face of the very first clause of the First Amendment, which clearly states that “Congress shall make no law respecting an establishment of religion, or prohibiting the free exercise thereof.” The open anti-Muslim bigotry espoused by Trump and his supporters is a direct challenge to this core constitutional principle.

Other clauses of the First Amendment, including the protection of a free press, have also been openly challenged by Trump, who has pledged to “open up our libel laws, so when [newspapers] write purposely negative and horrible and false articles, we can sue them and win lots of money.”

“When The New York Times writes a hit piece which is a total disgrace or when The Washington Post, which is there for other reasons, writes a hit piece, we can sue them and win money instead of having no chance of winning because they’re totally protected,” he said last month.

“We’re going to open up libel laws,” he continued, “and we’re going to have people sue you like you’ve never got sued before.”

There is also some irony in this threat, since Trump has enjoyed some of the most extensive media coverage of a presidential candidate in recent memory. There isn’t a day that goes by that Trump doesn’t seem to be dominating the headlines and claiming an inordinate amount of airtime on the broadcast news. And this observation is not just a matter of perception – the data backs it up.

Late last year a broadcast analysis by the Tyndall Report found that Trump accounted for 43 percent of all GOP coverage on network news in 2015. Trump dominated the campaign coverage on ABC, NBC and CBS evening news broadcasts, accounting for nearly double the number of minutes as Hillary Clinton, and more than three times as much as Jeb Bush.

Between January and November 2015, according to Tyndall’s data, Trump’s campaign was covered for 234 minutes on the three newscasts, compared to just ten minutes for Bernie Sanders. And this data doesn’t even count all of Trump’s appearances on morning programs and Sunday morning talk shows, which would increase his airtime exponentially.

In short, there is probably no human being alive who currently has greater access to the media and a bigger megaphone than “The Donald” – with the possible exception of President Obama or Pope Francis. And while not all of this coverage might be considered positive, there is good reason to believe that even the “negative” coverage is generally orchestrated by Trump and his surrogates.

Back in 1987, Trump wrote in his book “The Art of the Deal” that he had essentially figured out how to play the media to his advantage by being “a little outrageous.”

“One thing I’ve learned about the press is that they’re always hungry for a good story, and the more sensational the better,” he wrote. “If you are a little different, or a little outrageous, or if you do things that are bold or controversial, the press is going to write about you.”

This seems to be the same playbook that he is using today, issuing outrageous statements and whipping his crowds up into a hateful frenzy, increasingly leading to physical violence being perpetrated against demonstrators, meanwhile dominating the news cycle day after day. And then of course when people challenge him on it and manage to shut down one of his rallies, he is the first one to claim victimhood and cry out about freedom of speech.

While freedom of speech is of course vital to democracy and should generally be considered sacrosanct in a free and pluralistic society, it also would be fair to say at this point that Trump has had more than his fair share of “free speech” in recent months, and if people continue to challenge his divisive rhetoric through disruptive protests at his rallies, it should hardly be considered a tragedy – especially considering that much of his own speech openly disparages First Amendment principles of freedom of religion and of the press.