Torture, police brutality and the arrogance of unchecked power 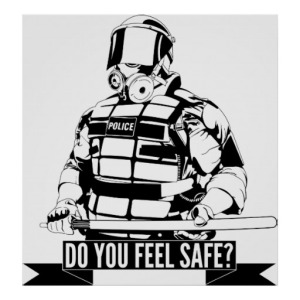 The international fallout from last week’s long-delayed release of the Senate Intelligence Committee’s 500-page executive summary of its still-classified 6,000 report on CIA torture could hardly be more intense, with calls coming from the United Nations, foreign governments and the human rights community for prosecutions of those who carried out or authorized the torture techniques described in the report, including senior officials from the Bush administration.

But judging from the self-assured comments of CIA and former administration officials, there is no real concern over the possibility of any criminal liability, a lack of accountability which has led to a palpable arrogance among those who would be behind bars if laws were actually enforced on an equal basis in the United States.

The above-the-law sense of entitlement was perhaps most clearly on display in former Vice President Dick Cheney’s appearance this Sunday on Meet the Press, stating that when it comes to using torture, “I’d do it again in a minute.”

Short of this rather high bar, nothing, by definition, that the United States does to its detainees could conceivably be considered torture.

Similarly, when asked about the large number of innocent people (26 out of 119 CIA detainees, according to the report) who had tragically been detained and tortured in error, for example Gul Rahman – a victim of mistaken identity who was chained to the wall of his cell, doused with water and froze to death in CIA custody – Cheney stated indifferently that these individuals essentially don’t matter in the grand scheme of things. The only problem that Cheney had was “with the folks that we did release that end up back on the battlefield.”

“I’m more concerned with bad guys who got out and released than I am with a few that, in fact, were innocent,” he said. Taken to its logical conclusion, Cheney’s reasoning would seem to hold that it is preferable to indefinitely detain and torture a million innocent people than to allow one “bad guy” to slip through the cracks. The implications of this logic are, needless to say, chilling (not to mention completely at odds with the legal principle of presumed innocence).

At times, watching Cheney make these cold rationalizations on Meet the Press, it may have occurred to viewers that the more appropriate venue for this interview would have been on the witness stand of a courtroom. After all, what Cheney was defending was not just controversial policy choices, but clearly defined crimes of torture and murder. Although he was sure to emphasize that “All of the techniques that were authorized by the president were, in effect, blessed by the Justice Department,” the fact remains that providing the cover of law to a crime makes it no less of a crime.

This is a point that UN Special Rapporteur on Human Rights and Counterterrorism Ben Emmerson specifically made last week following the release of the report. In a statement, Emmerson said, “The fact that the policies revealed in this report were authorized at a high level within the U.S. government provides no excuse whatsoever. Indeed, it reinforces the need for criminal accountability.”

Emphasizing that all individuals responsible for “the criminal conspiracy” described in the Senate report “must be brought to justice, and must face criminal penalties commensurate with the gravity of their crimes,” Emmerson noted that “international law prohibits the granting of immunities to public officials who have engaged in acts of torture.”

Judging from Cheney’s arrogant display on Meet the Press, however, there appears to be very little appreciation for the niceties of international law such as its expressed prohibition on official immunity when it comes to the crime of torture. He seems to be quite confident, indeed, that official immunity is unnecessary when there is an implied unofficial immunity that is granted to public officials in the United States, this being the case whether it pertains to CIA torture or police brutality.

The same arrogance that Cheney is so casually displaying can also be seen in the closely paralleled story of the recent spate of police shootings of innocent African Americans, and the remarkable wave of demonstrations that has taken hold across the country in response.

With large-scale protests happening in most major American cities over the past month – particularly since grand juries decided not to indict the police officers who killed Michael Brown in Ferguson, Missouri, and Eric Garner in New York City – one might think that cops would be extra careful these days not to come across overly arrogant. This, however, would not be the case.

In response to the NFL’s Cleveland Browns’ wide receiver Andrew Hawkins taking the field on Sunday wearing a T-shirt protesting recent police shootings in Ohio – reading “Justice for Tamir Rice and John Crawford” on the front and “The Real Battle for Ohio” on the back – Jeff Follmer, president of the Cleveland police union, claimed the shirt was disrespectful and disparaged the very idea of athletes holding opinions about anything other than sports.

“It’s pretty pathetic when athletes think they know the law,” Follmer said in a statement. “They should stick to what they know best on the field.” In other words, keep your opinions to yourself, boy, and just play football. Follmer also demanded an apology from the Cleveland Browns organization, which to their credit, the Browns did not extend.

Instead, the Browns fired back with a statement saying the organization endorses the rights of players “to project their support and bring awareness to issues that are important to them if done so in a responsible manner.”

Hawkins also weighed in with comments to the media that revealed, in fact, a deep knowledge and understanding of what law and justice mean (or should mean), contrary to Follmer’s condescending remarks. “Justice,” he said, “is a right that every American should have. Justice means that the innocent should be found innocent. It means that those who do wrong should get their due punishment.”

His six-minute locker-room monologue to reporters ended with him choking up while drawing a parallel between his own young son and the tragic death of Tamir Rice, the 12-year-old boy shot by police in Cleveland on Nov. 22 while holding a toy gun.

“My number one reason for wearing the T-shirt was the thought of what happened to Tamir Rice happening to my little Austin. And that scares the living hell out of me,” he said.

This genuine, personal fear of police violence is one that has been widely expressed over the last several weeks of protests taking hold across the country. As Democracy Now’s Aaron Maté reported from New York’s “Millions March” on Saturday, one of the dominant themes being expressed on the streets was “a sense of not feeling safe, not feeling safe themselves and not feeling safe for their loved ones, people of color in heavily policed communities.”

Interviewing protester Darrell Greene, Maté asked him to explain his sign, which read “Me, my father, my son. Who’s next?”

Greene responded, “At this point, I know I’m a productive citizen, and I don’t feel safe in my own community. I’ve never been in trouble with law enforcement. And from what I’m seeing on the news and what’s been going on, I really wonder: Am I next? I’m wondering if the people in my community are next. We’re all productive citizens, and we’re in fear for our life. We feel like it’s open season on all minorities, and we want to know if we’re really safe.”

Protester Nilan Johnson echoed these sentiments. “I’m here because Americans, period, are being preyed on, right now,” he said. “African Americans are once again fighting for the right to be human, and I think that’s horrible.”

Asked whether he feels, as a person of color, whether he is unsafe in his community, Johnson replied, “That’s – I feel that daily, so I feel that’s a preconditioned nature now. I feel threatened and marked and cornered. And everybody here feels the same way. And we’re trying to keep our humanity.”

If not a direct byproduct of the war on terror’s excesses and the impunity that law-breakers at the highest levels of government enjoy, this feeling of powerlessness, insecurity and injustice is certainly closely related. Indeed, as far back as 2007, civil rights leaders were drawing these connections, in particular in a report prepared for the United Nations entitled “In The Shadows Of The War On Terror: Persistent Police Brutality and Abuse of People of Color in the United States.”

Since 9/11, the report explained, “there have been dramatic increases in law enforcement powers in the name of waging the ‘war on terror,’” while simultaneously, counter-terrorism policies have “created a generalized climate of impunity for law enforcement officers, and contributed to the erosion of what few accountability mechanisms exist for civilian control over law enforcement agencies.”

This has led to an erosion of public discussion and accountability with respect to the use of excessive force against people of color, while at the same time, “systemic abuse of people of color by law enforcement officers has not only continued since 2001 but has worsened in both practice and severity,” according to the report. As a representative of the NAACP put it, “the degree to which police brutality occurs … is the worst I’ve seen in 50 years.”

Even establishment publications such as the Wall Street Journal have noticed the troubling trend of rising police violence and its connections with the war on terror. As a feature article in WSJ put it in August 2013, “the war on drugs and, more recently, post-9/11 antiterrorism efforts have created a new figure on the U.S. scene: the warrior cop – armed to the teeth, ready to deal harshly with targeted wrongdoers, and a growing threat to familiar American liberties.”

This threat to liberties is compounded when the justice system fails to hold accountable those who break the law and violate people’s rights. Whether it is Eric Garner in New York or Gul Rahman in Afghanistan, the victims of injustice must have redress, and “those who do wrong should get their due punishment,” in the words of Cleveland Browns wide receiver Andrew Hawkins.

As human rights advocates and civil libertarians have warned since the early days of the war on terror, human rights violations of terror suspects will eventually set the United States on a slippery slope in which authorities deem it optional whether to respect the human rights of anyone, including U.S. citizens. At that point, anyone is fair game, and all of us, including law-abiding Americans, may find ourselves at the mercy of an unsympathetic authoritarian state.

← Not free, not fair: The folly of ‘finding meaning’ in the 2014 midterms
Washington Redskins, Charlie Hebdo and the free speech right to be racist →