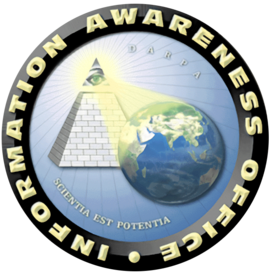 In the fall of 2002, the American public’s post-9/11 trauma-based complacency was briefly shaken when the Pentagon’s Total Information Awareness program was revealed to the country. Suddenly, a population that had seemingly resigned itself to a host of new inconveniences at airport security checkpoints and the government monitoring its library reading habits decided that there ought to be some kind of limits on the increasingly bold intrusions of privacy.

The Information Awareness Office had been established by the Pentagon’s Defense Advanced Research Projects Agency (DARPA) a few months after 9/11 to bring together several DARPA projects focused on applying surveillance and information technology by achieving Total Information Awareness. In the name of fighting terrorism, the program sought to track every purchase made with a credit card, every website visited, every email sent and received, every bank deposit, and various other transactions and communications that would all be stored in a ”a virtual, centralized grand database.”

The program boasted a logo that looked like it might have been borrowed from the cover art of George Orwell’s 1984. Unambiguously stating its intended goal of absolute omniscience, the IAO’s logo depicted a gigantic white pyramid with an all-seeing Masonic eye peering over the globe, with the slogan “scientia est potentia,” Latin for “knowledge is power.” It wasn’t too difficult to understand the underlying message of that slogan. As columnist William Safire explained it quite simply in the New York Times: “the government’s infinite knowledge about you is its power over you.”

After TIA was exposed in 2002, a public outcry from across the political spectrum led to congressional action in 2003 to supposedly kill the program. But although the project was believed stopped, the National Journal revealed in February 2006 that it was ended in name only, kept alive within NSA’s secret budget. The most important components were simply moved from DARPA to the NSA’s Advanced Research and Development Activity in Fort Meade, Md.

One TIA component, called the Information Awareness Prototype System, was renamed “Basketball” at NSA, but still provided the basic architecture tying together information extraction, analysis and dissemination tools developed under TIA. Another piece of TIA, called Genoa II, was shifted to NSA and re-titled “Topsail.”

But it wasn’t until Edward Snowden’s leaked documents began to be reported this summer by Glenn Greenwald in The Guardian and other publications around the world that the full picture of the NSA’s surveillance activities began to come more clearly into focus. It is only now that we can see that Total Information Awareness is indeed alive and well, and that the government continues to view absolute knowledge as its key to absolute power.

Some of the latest revelations were reported over the weekend by the New York Times (some say rather shoddily), which provide a general sketch of the NSA’s secret activities. The agency’s Dishfire database, for example, stores years of text messages from around the world, while the Tracfin collection accumulates gigabytes of credit card purchases, and the NSA Polarbreeze program hacks into computers.

Belying the claims that this spying is solely intended to fight terrorism, it is now also clear that these massive surveillance abilities are being used against friend and foe alike, with the NSA reportedly tapping the phones of 35 world leaders including the rightly peeved Angela Merkel. Last spring, when UN Secretary General Ban Ki-moon went to the White House to discuss Syrian chemical weapons, Israeli-Palestinian peace talks and climate change with President Obama, little did he know that the president already had a copy of his talking points, thanks to NSA hacking.

As the New York Times reported on Saturday, “It is hard to imagine what edge this could have given Mr. Obama in a friendly chat,” noting that “the White House won’t say.”

Whether the edge that the U.S. is given by all this surveillance is real or imaginary, the overriding point is that its obsession with total information awareness is emboldening the U.S. government to think that it is indeed the world’s all-knowing, omnipotent global superpower. It is operating under a stated belief that “scientia est potentia,” that knowledge is power, and by accessing any available information on all citizens of the world with no constraints whatsoever, while simultaneously excessively restricting any and all information about its own activities, the U.S. government is attempting to establish itself as the world’s undisputed and unassailable global superpower forever.

It wasn’t too long ago that FBI Director J. Edgar Hoover was considered the most powerful man in Washington simply because he knew all the secrets of all the other powerful men in Washington. He knew how to collect information and how to use it, which gave him the ultimate advantage over any would-be adversary and essentially made him untouchable.

Now that we are aware that the NSA routinely gathers intelligence on world leaders and millions of U.S. citizens, as well as average people from countries around the world, how do we know that it is not already blackmailing people such as Barack Obama or congressional leaders? What if the intelligence community is already making sure that its access to information is used to shield itself from scrutiny and accountability?

Perhaps this is why congressional “oversight” is such a joke and why the Obama administration is so aggressively persecuting leakers of these secret programs. While Obama might be the beneficiary of NSA spying on someone like Ban Ki-moon, he could also be the victim of NSA spying were he ever inclined to directly take on the U.S. intelligence community.

It’s hard to say what to do about all this, and while there are certainly legislative remedies worth considering such as the Freedom Act sponsored by Sen. Patrick Leahy (D-Vt.) and Rep. Jim Sensenbrenner (R-Wisc.), it’s important to remember that ten years ago, Congress also supposedly took steps to rein in these sorts of abuses when it cut funding to the Total Information Awareness program. It’s clear that the congressional action in 2003, even if well intended, had little to no effect in ending these abuses, which have only apparently grown in scale.

Perhaps one thing that could be considered is simply enforcing the laws already on the books (not to mention the Fourth Amendment to the Constitution). In this regard, it’s worth contemplating the possibility of prosecuting Director of National Intelligence James Clapper who misled Congress in testimony to the Senate Intelligence Committee last March.

In what he now acknowledges was “clearly erroneous” testimony, Clapper offered false assurances that there was no mass collection of Americans’ phone data by the NSA, exposed later as untrue by the Guardian.

When Sen. Ron Wyden had asked Clapper directly, “Does the NSA collect any type of data at all on millions or hundreds of millions of Americans,” Clapper said, “No, sir.”

He then backtracked a bit by saying, “Not wittingly. There are cases where they could, inadvertently perhaps, collect – but not wittingly.”

This was clearly a false statement, and under the United States code, it is a felony to mislead the United States Congress. While baseball players have recently been prosecuted under this statute for denying steroid use at congressional hearings, apparently directors of national intelligence are given a pass. Then again, perhaps this is simply because the old adage happens to be true: knowledge is power (and the NSA knows everything).